There was so much talk about Atlanta’s new Maynard H. Jackson Jr. International Terminal during the past year, so I couldn’t wait till it opens. Luckily, on the fifth day after the Grand Opening I had a departure flight to Munich where I planned to start my “EuroTrip 2012”. 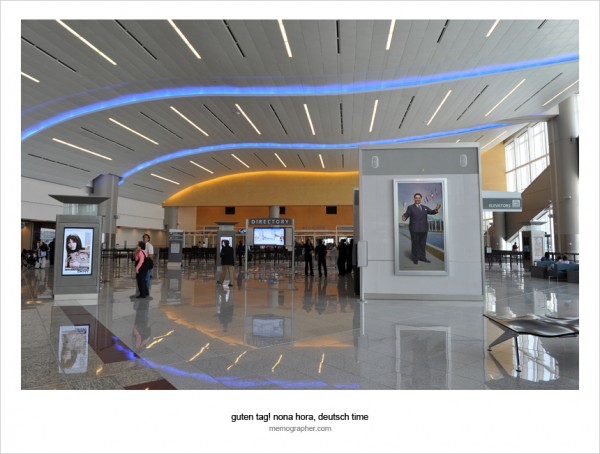 Unfortunately, my hopes and high expectations died after this very first trip. For me a new Atlanta’s International Terminal was a huge disappointment!

Hope one may find the following comments helpful.

Parking is a mess!
– At first, there is not Daily Parking in walking distance from new Atlanta’s International Terminal. Only Hourly Parking is available. Who does fly Internationally and leave his car on Hourly parking deck?
– “Airport Park-Ride” (a.k.a. Daily Parking) is located far away from the Terminal. The intervals between the shuttles to and from Terminal are 15-20 minutes… I wish there was “PreFlight” parking lot close by. I had used “PreFlight” for years. Their shuttles follow your car to pick you up as soon as you enter their parking lot!
– It took about 15 minutes to find a parking spot for my car (three floors of parking deck were fully packed), get to the elevators, and get to a shuttle. It was 5-mins ride. So plan 45 minutes for parking!
– There is not a road sign of Daily Parking on your way from highway I-75. I have missed the turn. Actually, there was a parade of cars who missed the turn and who were driving to the Terminal to make a U-Turn. There is no way to turn back when you missed it- One Way road :)
– Here is another trick. For domestic flights you have to park at Domestic (old) parking lots. For International flights at new International parking lots. So, if your International flight departs from Atlanta, you will park at the new International Terminal. Here is a surprise! – if your return International flight has a connection in any US city, you will arrive to Atlanta’s Domestic Terminal (NOT where your car is parked). How convenient is that? Note, you will need to take a complimentary shuttle from Domestic Terminal to a new International Terminal Park-Ride parking.
– By the way, “Airport Park-Ride” is not Daily Parking. It is an hourly parking, where 24 hours cost $12 (May 2012).

Layout is wrong!
– What is The New Atlanta Airport International Terminal? – Basically, that is a new Concourse-F (with Check-In lobby and Security gates) attached to an old Concourse-E. But, wait! A problem- Concourse-F is located about a half mile away from an old terminal. All passengers who arrived at Concourse-E and who need to go to Passport Control and International Baggage Claim will have “quite a walk” (as our flight attendant has named it), by foot for about 15-20 minutes. There is no trains nor golf cars for those who have just arrived and haven’t passed passport control yet! A girl with a heavy shoulder bag was complaining about The Walk for all 15 minutes… very loud and in not-appropriate English :) I cannot imagine how much time I would need to add to my schedule for a connection flight in Atlanta. I am sure three hours would not be enough. See more below and keep this number in mind if you plan to travel through Atlanta.

Confusion!
– The worst of this topic was a video clip on board of a landing Delta flight which still shows directions for an old airport! That was just crazy! Why do you show it to people, Delta? The flight attendants didn’t explain anything at all.
– Instructions from a flight attendant: “The passengers who have a connection flight and those who’s final destination is Atlanta will split up at some point where the airport guides will tell (a luggage will arrive to Domestic Terminal for ones and to the International for others)”. However, the airport guides were too lazy to tell everybody :) So, next to me in Passport Control line was a woman who missed the “split-point”. She stayed in a Passport Control line for a while until she figured out that she is in a wrong terminal (NOT where her luggage was and NOT where she needed to get a connection flight). How fun!

Unprofessional services!
– Attention! I stayed in Passport Control lines for 45 minutes! That was my longest stay ever! The guy, who was arranging people in the waiting lines, stupidly redirected me and others several times to different lines… How difficult can it be to split up people among two lines- “US Visitors” and “US Citizens”?
– This has never happen to me before. I got used to that the U.S. Custom Officer smiles at me and welcomes me home during passport control procedures. But at this time an officer had thrown my passport to me saying something similar to “take it off” (meaning a passport cover). I couldn’t resist this and had to say a few words to him, which cost me another round of security check.

And, yes, in Atlanta’s new International Terminal we do not need to go through Security gates and recheck our baggage upon exiting Customs. I used to hate that re-checking procedure… But now, I would rather do that.

August 2012 update:
Yesterday I came home from my Southeast Asia trip and decided to add an update on the performance of Atlanta’s New International Terminal. Yesterday my airplane arrived at Terminal F. So the walk to the Customs was about 3 minutes. Time spent in a passport control line (at the Customs) was about 5 minutes. Total time between exiting airplane and stepping out of the Airport was about 12-15 minutes. It was not bad at all! By the way, the “landing video” on Delta’s flight is updated now. It seems like things started to improve. The Delta’s meals, however, are still horrible! I guess I need to post some sort of “Chicken or Pasta?”-story which will further improve Delta’s services [wink] 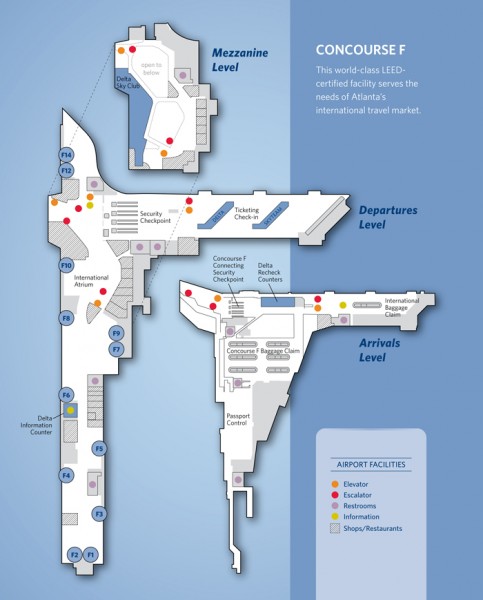