‘Tales Of Asia. The Faces of Angkor’ Book

Welcome to Memographer.com – a web-blog dedicated to my photo / memo projects. I start blogging here with the news- my third photo book of Nona Hora project has been published. It contains about 400 photographs from my recent trip to Cambodia, South Asia. The book is titled  “Tales of Asia: The Faces of Angkor”. Below is a front cover of the book. I will post some pictures from the book soon. Stay tuned. 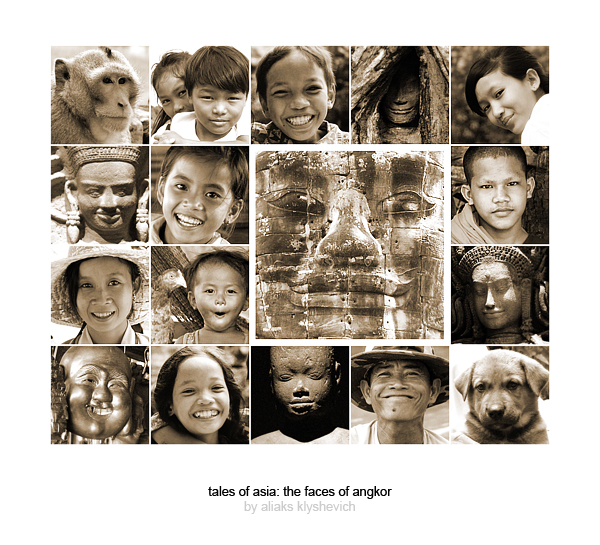 Cambodia
The Kingdom of Cambodia (sometimes transliterated as Kampuchea to more closely represent the Khmer pronunciation) is a Southeast Asian nation bordered by Vietnam to the east, Laos to the north, Thailand to the northwest, and the Gulf of Thailand to the southwest.

Cambodia has had a pretty bad run of luck for the last half-millennium or so. Ever since the fall of Angkor in 1431, the once mighty Khmer Empire has been plundered by all its neighbors. It was colonialized by the French in the 19th century, and during the 1970s suffered heavy carpet bombing by the USA. After a false dawn of independence in 1953, Cambodia promptly plunged back into the horrors of civil war in 1970 to suffer the Khmer Rouge’s incredibly brutal reign of terror, and only after UN-sponsored elections in 1993 did the country begin to totter back onto its feet.

Much of the population still subsists on less than the equivalent of US$1 a day, the provision of even basic services remains spotty and political intrigue remains as complex and opaque as ever; but the security situation has improved immeasurably, and increasing numbers of visitors are rediscovering Cambodia’s temples and beaches. Siem Reap, the gateway to Angkor, now sports luxury hotels, chic nightspots, ATMs, and an airport fielding flights from all over the region, while Sihanoukville is getting good press as an up-and-coming beach destination. However travel beyond the most popular tourist destinations is still an adventure.

The two pillars of Cambodia’s newly-stable economy are textiles and tourism. The tourism industry has grown rapidly. The long-term development of the economy after decades of war remains a daunting challenge, as the population lacks education and productive skills, particularly in the poverty-ridden countryside, which suffers from an almost total lack of basic infrastructure. More than 60% of the population still gets by on subsistence farming. The government is addressing these issues with assistance from bilateral and multilateral donors. New construction of roads, irrigation, and agriculture are invested to bring up the rural areas.